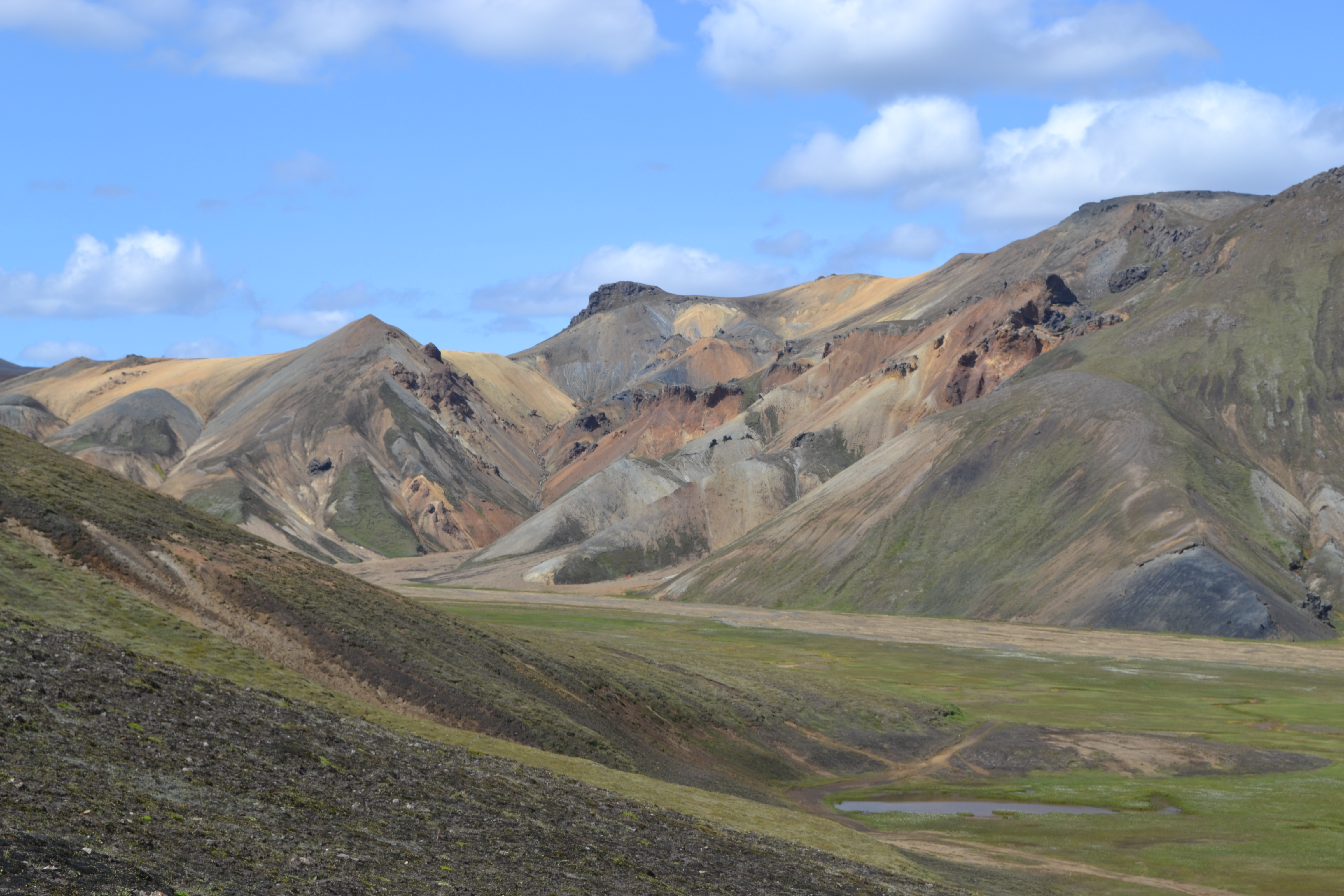 This is Part 5 in a series outlining my family’s exploration of Iceland during the summer of 2019, pre-COVID. It was a mostly outdoor experience, exploring the wild and natural sights of a beautiful country during the height of summer. For the full journey, and notes on places to go and things to see, check out the other posts in this series.

After a short day in Reykjavik, we were ready to get back out into the wilder parts of Iceland. I was excited and anxious, because this was to be one of my most anticipated destinations, and I wasn’t entirely sure the excitement was shared. Today marked the reason we had a 4WD vehicle – our little Duster would take us hours inland, over the unimproved F-Roads, across lava fields and up mountain passes, to a little backcountry basecamp called Landmannalaugar.

Landmannalaugar is many things – a campground, a way station, the site of a popular hot spring, and the northern terminus of the Laugavegur (roughly, “Hot Spring Route”), a ~35-mile backcountry trail that wound south through the mountains and glaciers into a beautiful valley called Þórsmörk, and then via an optional extension to the southern coast at Skogafoss (a popular waterfall we’ll visit in our NEXT episode).

We obviously weren’t going to hike the Laugavegur today – but I wanted to get into the mountains, and the multi-colored rock, volcanic lava beds, sulfur vents, and tundra around Landmannalaugar offered a great set of dayhike options that would provide a taste of the interior.

First, the rough roads. Getting TO the F-roads was no short trip, and we wound our way upstream along glacial rivers, and past glacier-topped mountains. Along the way, we managed to spot an Arctic fox in dark summer fur running across the tundra. And then, we left the pavement behind.

Much of our journey led across a flat, black plain of lava. Some spots were solid hard-pan, compacted dirt. Others were soft and sliding, and some were washboarded. The driving wasn’t hard, but it was tricky. And not fast. Still, our little SUV seemed to be up to the task, and I had a great time working the manual transmission as we occasionally transitioned from long straight lava field to winding narrow valleys and blind curves. The landscape was so… different… from anything we’d been exposed to. It wasn’t completely unlike the desert – except it was mostly black, or gray, and the plant life was sparse, when it was existent at all.

We made a few stops along the way, first at a flooded crater called Hnausapollur (rough translation – “Clumpy puddle”), and then at a large, windswept lake called Frostastađavatn (rougher translation – “Frosty water outpost”). The winds out here were fierce, probably a steady 20 knots, but funneled through mountain passes. Both bodies of water were beautiful in their own way, reflecting the blue of the sky to create a splash of color in a very black landscape – but then, a few minutes farther along, we rounded a rock outcrop to suddenly see an outburst of color. Green grass covered the tundra, and the mountains themselves seemed to suddenly take on every color in the rainbow, with pinks, blues, and even greens concentrating in the volcanic rhyolite.

Up against a rugged cliff marking the obvious toe of a lava flow, a small outpost stood in the grass, surrounded by tents and a small parking lot. This was Landmannalaugar (even rougher translation – “Land of the people’s hot springs”), a veritable oasis in what, to this point, had been a bleak land. The road into Landmannalaugar crossed a shallow river through a ford, but we had been warned that even though our rental car might be capable, our insurance certainly wouldn’t cover water damage or help with any recovery efforts should we unintentionally depart the shallowest part of the crossing. Fortunately, there was another parking lot that allowed us to stop short of the crossing, and take a footbridge across instead. From this vantage point, walking toward the ranger station, we got to watch others make the crossing and get a sense that, yes, it was probably a bit deeper than our Duster would have made comfortable.

We even got to watch a big cruising motorcycle approach the ford. The rider dismounted, surveyed the river, hands on hips, then quickly retreated. We were a little disappointed not to get to see the attempt, possibly because even as onlookers we could tell it probably wouldn’t end well. Fortunately for the rider, he realized it as well.

Though we were far from civilization, it is fair to say that there are a fair number of people at Landmannalaugar during the summer. The Laugavegur trail is extremely popular, particularly during the summer (it was July 7), since the passage among the higher elevations and among the glaciers is prone to harsh weather even under the best of conditions. In addition, several outfitters run all-terrain buses from Reykjavik to bring trekkers to Landmannalaugar, and given the short hiking season here, we saw many, many people either camping, or starting their journey south, winding their way up into the cliffs marking the edge of the lava.

We lingered around base camp long enough to validate our plan – we’d start off on the Laugavegur and climb to the shoulder of a nearby mountain, then turn off on a side trail to descend through Grænagil (the Green Canyon) to create a loop about 4.5 miles in length. Confident of our plan, we hit the trail and passed by the hot springs. The springs themselves were tempting, but we kept our distance, knowing that these particular pools were known for au natural bathing – or at least it wasn’t frowned upon here – and we weren’t ready to give the boys that kind of European education.

After an initial climb, we leveled out onto a well-marked trail that wound among spires of lava rock, including sheets of exposed, reflective obsidian glass. It was clear that we were atop a slab of lava, perhaps 100 feet thick, that almost filled a valley between pink and orange mountains. Ahead, and beyond the mountain that appeared to be the source of this flow, wide valleys were filled with green grass and sparkling streams. The mountain – the volcano, I suppose – was not extremely tall, but it was an odd pink color, and steam poured from its sides at several places both at its base, and along its slopes. Here and there, a lumpy black spire of cooled lava jutted away from the pink scree. It reminded us of Mt. Doom – albeit a small, pink Mt. Doom, surrounded by mountains that were predominately orange to the west, and greenish blue to the east.

The Laugavegur led us to the base, and then up Mt. Doom, before reaching an intersection just uphill from a substantial sulfur vent. Steam poured out of a hole in the ground, and the rocks around it were covered with yellow crystalline deposits. Above, the Laugavegur continued to climb south, up Mt. Doom and beyond, farther into the highlands. To the left, our route led back down, past the sulfur vent, and into the green canyon.

First, we had to journey into the center of the Earth. (It was here that we realized that Jules Verne’s actual entrance into the underworld was through Snæfellsjökull, where we’d been three days ago). We ventured as close as we could to the source of the steam, holding our breath against the rotten-egg smell.

From here, our path led through the chaos of the lava field. From above, no path was evident, but as we walked, we realized that it was clearly, though subtly, marked by color-coded wooden posts. Letting the boys get a head-start though, it felt as if they were disappearing into a lava and boulder maze.

About halfway down the lava field, the trail led us east, off the slab and into a valley, down to a fairly substantial creek that flowed down from the highlands behind us. We then followed the creek into Grænagil, where the rock walls transformed to a blue, green, gray color. The walking was easy, and we remarked how – with no trees or any substantial vegetation – we had walked through an incredible array of colors and environments in a very short 4-ish miles. All of it was geology. Just rock, and the volcanic activity beneath. It was incredible, and gorgeous.

Eventually, we emerged back onto the grassy plain where tents surrounded the Landmannalaugar ranger station, and we started to make our way out. Though the hike was short, our day-long adventure to the area provided access and exposure to landscapes that were totally new to us. None of us were disappointed.

On our way back to civilization, we paused to admire the Hekla volcano. This mountain is extremely active, and has been for centuries. Recently, it has erupted in 1970, 1980, 1990, 2000… and then nothing. It was now 2019, but the mountain seemed quiet, except for obvious slabbing of the snow and ice on its summit, hinting of avalanches in the near future.

We stopped in the town of Selfoss on our way back to Reykjavik, and had an outdoor dinner at Kaffi Krus while listening to a small band play tunes in both English and Icelandic. Another great day in Iceland!

Next – we pack up and move east again, to a new base camp. We take up residence at a cabin near Eyjafjallajökull, from which we explore the southern coast eastward to Vik.