The James River Heritage Trail system, in downtown Lynchburg, VA, is actually a collection of five interconnected rail-to-trail bikeways that make up 9.5 miles of trail system in and around the Blackwater Creek Natural Area, the riverfront area in downtown Lynchburg, and Percival’s Island.  All these trails offer a pleasant escape while mingling with active railroads and historical relics of the old Norfolk and Western Railroad.  Like most rail trails, the path is essentially flat with a very slight climb uphill going away from the river.  Most sections are paved, except where indicated below.

GPS data from a recent trip, and waypoints marking ends of the fairly intuitive un-travelled sections, can be found here. 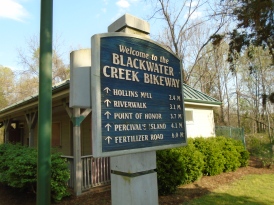 Starting from the west end, the Blackwater Creek section begins at the Ed Page trailhead on Langhorne Road, with ample parking and a nice park and flower garden, and restrooms.  From here, the paved trail goes 3 miles to the James River, generally following the path of Blackwater Creek and through several steep cuts, so that the trail passes through a notch with steep cliffs on both sides.

About one mile in, the trail passes another parking area and access point at Randolph Place.

A mile later, the trail passes a striking viewpoint as it crosses under a high steel trestle (still in use by Norfolk Southern), while almost simultaneously crossing a bridge across a gorge with Blackwater Creek far below.  Almost immediately afterwards, the trail crosses through an intersection with the Kemper Station Trail, and the Point of Honor Trail, described below.

Shortly after this, the trail passes through the Hollins Tunnel.  This narrow curved tunnel was blasted out of solid rock, and is almost a half mile long, lit, and almost always wet and drippy with water seeping through the ceiling.  The tunnel is a highlight!

After the tunnel, the trail continues its journey downhill until reaching the current Norfolk-Southern tracks at Jefferson Street along the James River waterfront and an intersection with the Point of Honor Trail.  At this point if becomes the Riverwalk.

This section is a paved spur, traversing about a mile from the Blackwater section up a tributary stream valley and paralleling the active tracks that use the high trestle.  The path ends at the Kemper Street Station, an Amtrak stop.  Parking and access are available at the station.

This is a 1.75 mile stretch that bypasses the Hollins Tunnel by descending (via a steep, blind S-turn) into the creek valley and following the Blackwater Creek all the way to the River and re-connecting with the Blackwater Trail at that point.

The scenic highlight on this section is the Hollins Mill Dam, where another park provides parking and vehicle access.  The dam is about 15-feet tall with a broad spillway.  The trail crosses the creek on a low-water bridge below the dam, passing under a road bridge as it continues downstream.  Occasionally, the creek is high enough that this low-water passage is underwater – it can be bypassed by riding over the road bridge to rejoin the trail on the other side. 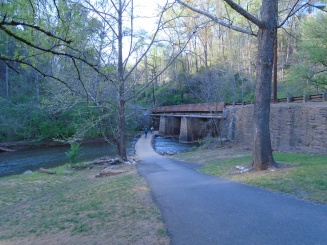 This section is a mile long, and the most ambiguous.  On one hand, it can be followed as a series of short road and sidewalk runs through downtown.  The actual trail connects parking lots along a gravel bikeway past greenspace and a few restaurants in old converted railroad buildings (e.g. the Depot Grille) and industrial warehouses.  Either way, the trail uses Washington Street to cross active railroad tracks and intersect with the Percival’s Island Trail.  To the right, there is another parking lot and access point.  To the left, the trail goes to Percival’s Island.

From the parking lot off Washington Street, this paved trail goes upstream, then across an old railroad bridge to a long slender island – Percival’s Island – in the middle of the James River.  The bridge has been augmented with a wooden viewing platform in mid-channel offering views of the river and downtown Lynchburg.

Percival’s Island is a mile long, and used to be completely occupied by Norfolk and Western rail yards and service facilities.  Old relics, such as an engine servicing pit, still hide in the woods just off trail.

At the eastern end of the island, the trail uses another old railroad bridge to cross to the east/north side of the river, then follows the James for another 1.25 miles before dead-ending just past its final road access at Fertilizer Road.

Combined, this trail system offers a lot of scenic opportunities of different lengths.  My sons, my father and I recently did a trip from the Percival’s Island access up the Riverwalk and Blackwater all the way to the Ed Page terminus, then back down along the Point of Honor Trail to the start point, with a quick detour just across the bridge to the island.  Total length for us was 8.75 miles, and a lovely afternoon!