There is another binocular comet gracing our night skies, and this may be the last one of the year.  It’s hovering just below naked-eye brightness at the moment, but it’s high in the evening sky (none of this early pre-dawn nonsense), in Bootes, between Arcturus and the Big Dipper, very close to where Comet 45P was back in February.  This time, I was actually able to get a picture of it BEFORE writing about it!

Comet C/2015 V2 Johnson is, like others this year, glowing green, and with more powerful telescopes you may be able to see TWO tails – a stubby bright dust tail, and a gas tail driven by solar wind that is at right angles to the dust tail, long and slender.  The comet will be moving quickly south, almost parallel to the horizon, through May and early June.  (Sky and Telescope has a good chart here.)

The shot above was taken last night with just a Nikon DSLR, and even with the low resolution you can make out a stubby tail headed up and left.  The glow at lower right of the frame is the effect of the almost-rising gibbous moon, and the two bright stars in that glow are the edge of the Northern Crown, Corona Borealis.

That reminds me – as promised, a brief discussion of newly visible constellations is in order.  The next Zodiac constellation (after Leo) is now high enough to be readily visible after sunset, though it suffers from having few bright stars and no easily recognizable asterisms.  Virgo is marked most easily by the bright star, Spica, and currently, Jupiter, which is hanging almost directly above it.  Virgo’s head is near Leo’s tail, and Spica marks the midpoint of the constellation, usually marking her left hand (right, as you look at her).

Bootes, the herdsman, you recall, is the large kite-shaped constellation that bridges the gap between Virgo’s waist and the handle of the Big Dipper, aka Ursa Major’s Tail.  You can use the Big Dipper’s arc to find both – “Arc to Arcturus” (in Bootes), then “Spike to Spica” along the same trajectory.  Of course, with Jupiter nearby, Spica may not require all that leaping from Ursa Major. 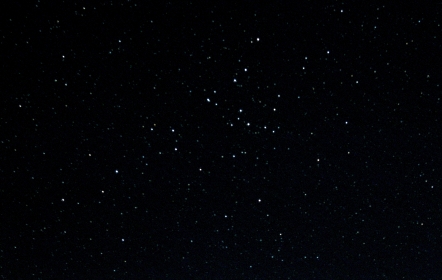 Below (East) of Bootes is a semi-circle of stars that make up Corona Borealis, the Northern Crown.  Above (west), and near Virgo’s head and Leo’s rear haunches, is a mostly-dark patch with a beautiful open cluster, Coma Berenices, or “Berenice’s Hair”.  This area doesn’t have much in it – but point a pair of binoculars toward this region and the sky pops with countless stars in a beautiful, if dim, cluster.

Hopefully you can get a look at both Coma Berenices, and Comet Johnson this week.  Don’t overlook Jupiter either – and by now we’re less than a month from Saturn’s opposition, so we can look forward to that beautiful planet before summer’s end.