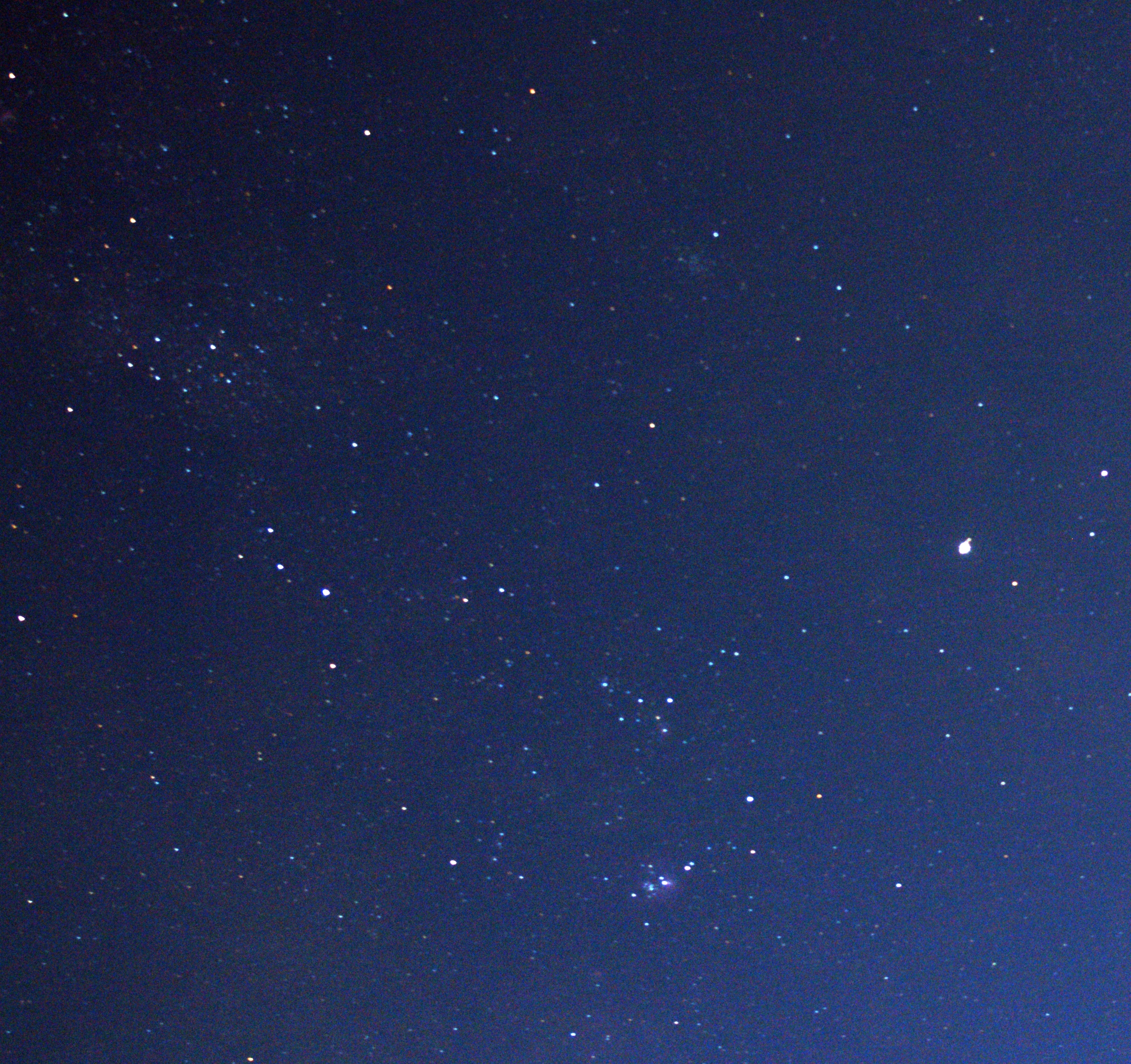 Warning: I’m getting a little over the edge here, and unwittingly going beyond “fun” casual stargazing into some serious effort to find the comets I’ve been talking about.  In short, I’m geeking out into some junior-varsity stuff – particularly since I didn’t start out with Astronomy being a main topic for this blog, it’s a tad uncomfortable to get this immersed on something so specific.  I didn’t intend for this to happen, or to spend so much time with it.  But I started following my own advice to find these things – wide-ish field, dark skies, and soak in the light.  I’ve learned quite a lot in a very short time, and I’m intrigued about the doors this is opening… I don’t blame you at all if you stop reading now, but if you’re curious about finding deep sky objects with just a DSLR camera (no telescope), here’s what I’ve learned.  (And if you’ve got some tips to make mine better and save me the experimentation with settings, that’s appreciated!!)

I can tell you this – if you’re looking for an opportunity for solitude, quiet time to yourself, maybe some inner reflection, or maybe you’re interested in watching the world wake up and enjoy listening to the birds start their morning song, then pre-dawn comet photography is maybe something you would enjoy.

I was up at 4:30am today, and outside ten minutes later, after noticing the evening clouds had gone and the Moon/Jupiter pairing was again crisp and visible.  For the next 2.5 hours or so, I was occupied with taking hundreds of pictures of things I couldn’t see, and then collapsing those shots down to a set of 5.  But in the process (and not until after the process was complete did I really know), I found the three comets I was looking for.

It was really NOT a good morning for this – skies were slightly hazy, with high thin cirrus. The full moon was high in the west, washing everything out, and after about an hour the eastern horizon started glowing with the approaching sun (you can see this in the Pan-STARRS and Lovejoy pics).  I could only really see (barely) the brightest stars in Pegasus and Aquarius, and the best I could do was just point the camera in the general direction of what I was looking for – no way could I actually see it.

So what I did was really surprisingly easy… Nikon DSLR D3100 on a tripod, set to RAW mode, ISO 3200.  Using a 70mm lens (not a wide angle, but not a tight zoom either, fairly large field of view), and set to 6 second exposure.  I used Stellarium (Freeware – I just downloaded it, but really liking the ability to map obscure solar system objects) for general orientation and “pre-briefing” the shots, pointed the camera, and crossed my fingers.  I could generally see enough after the first frame to confirm, by star pattern, that I was in the right area.  Once there, I took about 20 shots of each target.  Post-processing used Deep Sky Stacker (also Freeware) to combine images, then did some color enhancement – and in every case I had what I was looking for, even though the combined exposure time was fairly low (2 minutes).  Success, despite the fact that to naked eye, I could maybe see 2% of what I ultimately captured!

This was warmup – almost straight up, in the only “dark” part of the sky, in Draco.  I’d already found it once, but the other two were still so low the neighboring stars were getting lost in the glow at the horizon, and I needed to buy a little time and let them get higher.  41P is VERY diffuse, no real core.  Visible, but barely.  Glowing distinctly green.  Only the two labeled stars were naked-eye visible in this shot.  The one I took a week ago is a better picture, I think – still diffuse, but combination of darker skies and longer (~3 minute) exposure.  (Also, trust me when I say the WordPress software embedding pics on the post here doesn’t retain the highest resolution!) 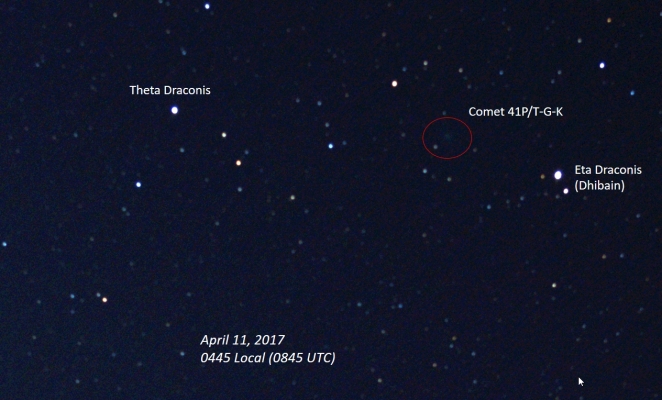 The new comet, only known for a month.  Low to the horizon, I could only see one corner of the Great Square in Pegasus (labeled) to aim with.  You can see dawn approaching in the glow at the bottom of this combined shot. Unlike 41P, the comet has a really tight nucleus.  Probably about the same brightness, but more like a fuzzy star than a diffuse blob.  Also green.

This one just popped on the radar last week because of an un-forecast brightening.  Also low to the horizon squeezed between being high enough to see and lost in the dawn.  I couldn’t see ANY stars in this frame with the naked eye, just aiming at a dark patch and confirming with the camera preview that the patterns looked right – I just labeled Albulan II for orientation.   Comet is about the same brightness as the other two – but a combo.  Tight nucleus, bit of a coma, and just a hint of a short, thin tail trailing off to the upper right.  That alone made this one interesting.  Also green!

Tried a couple other things too… random shots of open clusters in the eastern half of Cygnus (below).  Also a shot of Saturn that revealed some fuzzy items in the preview that were totally invisible to the naked eye – turned out to be some fairly decent shots of the Lagoon Nebula, Trifid Nebula and some open clusters in Sagittarius (Saturn completely overexposed). 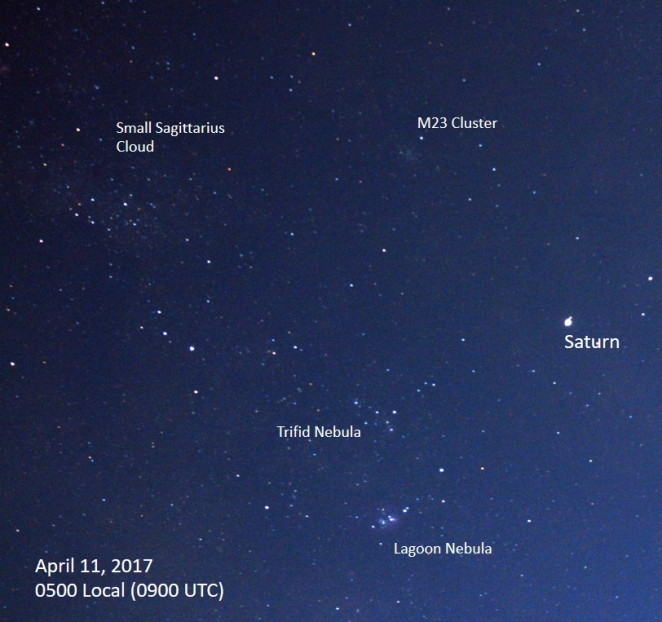 All in all – this was a pretty lazy attempt.  Extremely rushed, very-much-less-than-ideal conditions… and yes I achieved the goal of finding the comets, but I’m really more interested in what I could do on a really dark night, with more exposures (and higher equivalent time).  6 seconds and high ISO is a LOT better than the streaking I was getting last week from 10 seconds.  But when I look at these nebula shots, the one I threw in without comment of Orion and the Orion Nebula last week (even out of focus, it really captured the red color), I start thinking of dark skies and Milky Way.  I realize the Andromeda Galaxy will be easily visible pre-dawn in probably two weeks, and if I’m patient enough to get a LOT of frames…

Again, not something I meant to get into, but I’m REALLY intrigued about the possibilities if I can tweak the technique a bit more.  Comets might have just been the excuse, and the gateway drug.

Thoughts?  Have I “gotten out there” too far?

6 thoughts on “Astrophotography, or Just Obsession?”