Beginning with my own homework assignment, I did finally capture southern Scorpius.  As you can see, it’s REALLY low from my vantage point (any picture of stars that also features trees is a pretty good indicator of that).  Not only was I able to catch the two “Cat’s Eyes” at the end of Scorpius’s tail, the clusters I was seeking are also apparent (which, again, is very cool – to me – since they were invisible to the naked eye, particularly in the glare of a rising moon near the horizon!)

These shots show the Butterfly Cluster (Messier 6), the Ptolemy Cluster (Messier 7, NGC 6475), NGC 6281 (small, off to the right of the Cat’s Eyes), and unexpectedly I was able to spot the Northern Jewel Box Cluster (NGC 6231) through a hole in the trees!

On darker nights, these days, the Milky Way ought to be putting on a show, from these clusters, arcing up high overhead through Cygnus and all the way to Cassiopeia.  Sadly, the haze has kept me from really seeing this – but the summer’s not over yet.  As far as Scorpius goes, though, July is pretty much it – it’s big, it actually looks like the thing it represents, it’s easily recognizable!  But the ecliptic is far to the south, and before you know it the Scorpion will be setting at dusk. 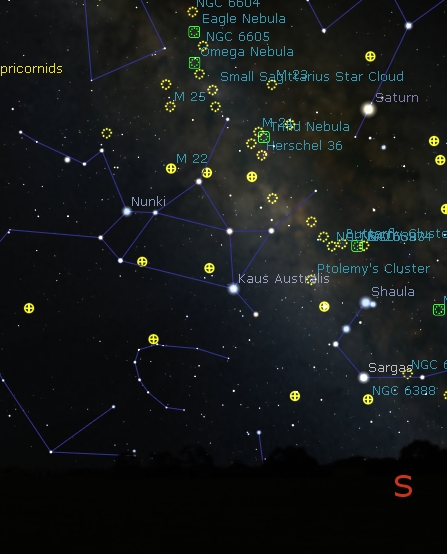 Sagittarius’s “Teapot”, the Galactic Center, and a target-rich environment of deep-sky objects.

Time to start looking at its neighbor – Sagittarius, the Archer!  This is also a difficult summer constellation, always sitting low in the south.  It is easily recognized by its “Teapot” asterism, and it sits right in the middle of the Milky Way… literally.  The Galactic Center is in this constellation, though the bright center is mostly obscured by dark clouds of dust, at least from our perspective way out in the outskirts of the galaxy.

It’s a beautiful time of year for stargazing (haze notwithstanding).

In other news, early risers may get a good view of Venus and the Moon together on Thursday, July 20.  Note how Venus has zipped through Taurus over the past week.

Also, if you haven’t heard – Juno, the Jupiter-grazing probe that’s been zipping closer to the gas giant, by almost a million miles, than anything we’ve sent there, did a flyby of the Great Red Spot last week.  Passing about 5600 miles from the cloud tops, Juno got unprecedented imagery that we’re starting to analyze.  The storm, big enough to swallow two Earths, has been around for at least 350 years, but like all storms all over the solar system, it’s a dynamic place.  The storm has been shrinking over the last few decades, and might ultimately dissipate completely.  For now, though, enjoy this close-up!