In my efforts to test myself, I sometimes get a little overconfident. I like to think I’m fairly level-headed and consider risks enough that I’m not doing anything downright STUPID, but I have certainly messed up enough to make me wonder just what the heck I thought was going to happen.

Such was the case on a recent backcountry trip to practice wilderness survival skills – particularly shelter-building. If you’ve never done this, consider giving it a try. It reaches back through fond memories and taps into some lost part of your childhood self to go out in the woods, build a “fort” out of stuff you find laying around, and then spend the night in it. How else, after all, can you prove it was a good fort?

NOT from this trip – but a previous example of a cozy debris shelter in the woods.

On this particular trip, there were eight of us. To mimic a survival situation, we set limits on man-made materials available. Key among these supplies was a certain square-footage of thin plastic sheet (about 6×8 feet) and a set length of binder’s twine or Paracord. This would be enough for a cozy two-person lean-to or tarp-tent, but not enough for an extravagant structure without using some natural materials. We also didn’t want to tear up the place just for fun, so we agreed to leave no impact, cut no trees, and just use existing resources that could be returned to the forest after a comfortable night.

I set an objective for myself – use only what I could find. No plastic, no cord. Just what I could build in three hours or so. I’ve done it dozens of times, no problem, and most of the battle is finding the right starting conditions, and using that as a foundation. I made my plan known, which in retrospect was the first snowball in the avalanche of badness that was to come.

Our area was a shallow creek valley in an oak/beech forest. Fairly open, some good flat to gently sloping ground, and lots of downed wood and leaf litter. All good so far.

Our date was awful…. Well, not really the date, but the weather that date was graced with. Early December, mid-40s, and rain. Not just rain, but the kind of rain that, when it does stop, coalesces into a heavy mist that hangs between the trees, a persistent wet that grabs everything it touches, soaking through clothes, dripping off branches… Enough to give the illusion of rain even when the local weather radar (we kept hopefully checking smart phones) shows zero precipitation. A pseudo-rain that starts in the treetops and follows you around. A never-ending cold, wet misery.

I don’t remember what sorcery we employed to get a fire started, but we did, a small cheerful beacon of warmth, smoke and hope, struggling to keep the moisture at bay. The fire became a rally point, a community center where we could retreat between periods of effort building shelter out of the surrounding forest, a kitchen, a dining room. It was a feeble, smoky thing, but the psychological value of having a fire can’t be overstated.

As the rain abated a bit, and became just “mist”, the fire ring was the spot where we commiserated, shared ideas and stories, and where everybody absolutely refused to forget about how I’d bragged about my shelter-to-be. Metaphorically, I’d made my bed. Now I had to literally to make it, and then lie in it. 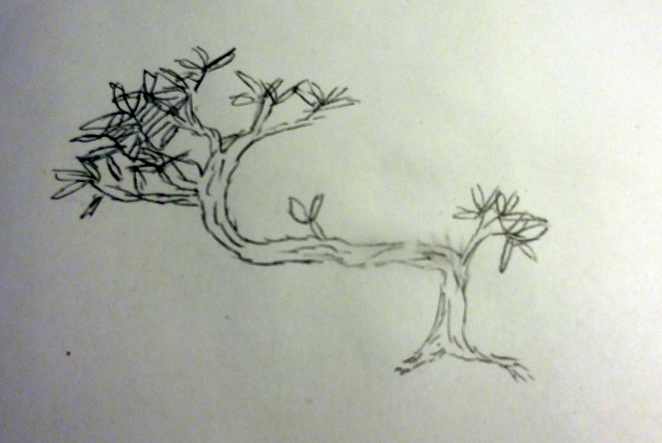 My starting point – a laurel with a hard, horizontal bend.  Perfect!  (Apologies that I don’t have photos – the dark and persistent rain made good photos difficult.  Hopefully my sketches convey the situation).

The key to debris shelters is to make a small opening with thick, warm (and rain-proof) walls. At first I found a large fallen pine with a small depression under it. Problem was, my son had already claimed this spot. It was good for about ten feet of thick-trunked tree length before the land fell away from the tree and down to the creek bottom. Here the tree could serve as one wall and a partial ceiling of a nice temporary house. I’ll spare the suspense and just say that my son had a good night.

I wound up selecting a laurel thicket with one strong trunk bent over almost horizontal before growing vertically into a leafy bundle. I created a huge pile of leaves underneath, turning the litter over to find the driest stuff I could. I made a framework of branches off that horizontal span of trunk so that I had a structure that looked like a large dead animal, with a sizeable spine and a hundred ribs. On top I piled more leaves. I wished I had palm fronds, palmetto, something to make thatch in such a way that I could trap and guide the rain, but we were in the wrong climate for that. No rock overhangs either – this was river bottom sandy soil with no rocks bigger than a pebble. Native people in this area long ago built longhouses with roofs of various reeds, but I didn’t have that either. I had oak, beech, a little bit of pine, and the living laurel. So what I lacked in quality and had to make up in quantity.

I was actually proud of the result. It was a hulking thing, a huge mass of unruly leaves and twigs wrapped up in hope that any water hitting it would trickle down the perimeter and not straight through. Inside, it was tight. Just enough room to roll over. And reasonably dry.

So it was with a bit of smugness that I showed it to the group, and suffered the obligatory good-natured ribbing. They called my house a “heap”, a “mess”, the sort of thing a drunken beaver might build in ten minutes, but without the associated architectural asthetic. Above all, they wished me “good luck”.

Conceptual Design (cutaway view) – Use the tree as a ridgepole and support for the rest of the structure.

Eventually, night fell, and the rain started to fall again. Desperate for shelter and out of excuses, we burrowed into our respective holes. It wasn’t long after I sealed the door with my backpack that trouble began. Rather than trickle to the exterior, water found a way through the laurel itself, water tension holding not just drips, but little flowing rivulets along the undersides of branches. Because my shelter incorporated the unavoidable design feature of a tree trunk protruding from my roof, these little torrents would run down and along my ridgeline, intersect the ribs I had placed against the main trunk, and suddenly the water tension would break, and a stream would cascade off and onto my sleeping bag, into my face. Seemingly everywhere. As the rain intensified, the sound of water outside competed with the noise of dripping inside. I covered my head and face with my coat and pretended it wasn’t actually happening, but as my bag started to soak through, the cold found an easy trajectory, through wet, from the ground, straight to my body. The very foundation of my home, the laurel trunk, was proving to be its undoing.

Pride wouldn’t let me give up. Between fitful catnaps, my subconscious registered changes in the rain outside, and I awoke during a lull – maybe an opportunity to make some midnight adjustments. But just then, I heard a yip and some galloping of at least two canines. Coyotes! Running past my shelter no more than five feet away, I could hear them panting, with raspy tongue-lolling noises, like when a Labrador tries to breathe around the tennis ball it won’t let go of. Straining to hear them, to know where they’d gone, I stayed put. By the time I’d convinced myself they’d moved on, the rain returned.

An hour later, another try – and by now I had abandoned my ego and was ready to give up. I wriggled out, grabbed an unused tarp we had laid down to keep wood dry for the fire, threw it over my hovel, and wriggled back in. Problem solved… EXCEPT… enough water had already saturated the many-leafed layers of my shelter that, though I was no longer accumulating new water, the dripping continued out of the walls and ceiling for another hour and a half. My bag was soaked, and it was still raining on me. At least now the sound of the tarp made it easy to differentiate outside rain from inside rain. 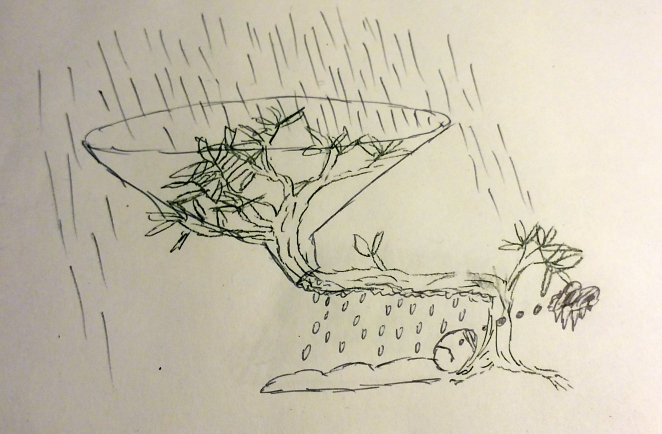 The effect of my final product.  The tree acted like a giant funnel to stream rainwater directly into my hut.  Misery ensued.

At about 4am, I really gave up. I wriggled out of my puddle, and turned my attention to re-lighting a fire. My ability to do so in these conditions had the effect of bringing meager satisfaction to what had been a truly miserable night. I built it strong, and warm, boiled water for coffee and sat by myself watching the clouds brighten up as the invisible sun broke the horizon. Slowly, one by one, the others in the group started shifting, awakening from a deep sleep, warm in the shelters they built without any hint of ego, but using EVERY OTHER TOOL AVAILABLE TO THEM.

As they got up, they were drawn to my fire, and we passed around the coffee pot. With a smile, they asked, “How was your night?”

I caught myself also smiling as I answered, “I learned a lot.”