Update 11/17 – The launch was successful and on schedule.  Scroll down to the bottom of this post for a couple pics from my perspective.

I’m having a hard time keeping up these days, between work and kid schedules – so I thought I was going to miss this entirely.  Fortunately (unfortunately?) weather intervened and caused a launch delay – but tomorrow morning, a Cygnus cargo module will launch from Wallops Island, VA on its way to the ISS, atop a Northrop-Grumman (formerly Orbital ATK) Antares rocket.

About 2 years ago, we tried to watch a similar launch.. and nothing happened.  We ultimately gave up, went back in the house, and saw footage of the rocket burning on the launchpad.  Hopefully this one will go smoother!

Night launches are particularly spectacular, and very visible from almost anywhere in the Mid-Atlantic.  I live about 70 miles from the pad, and it’s quite impressive even at this distance. No sound, of course, but pretty cool to watch.

With launches like this – resupply missions to the ISS – you can often see both craft.  Usually the ISS will fly past just before a launch.  For this launch window, it appears the station is well south of Wallops at launch time, but about an hour later, if you happen to be in the southern part of the US, you’ll see the ISS arc overhead in the South-SouthEast, with Cygnus in hot pursuit.

A more typical launch from Wallops!

Launch time is currently set for 4:01am.  If you’re an early riser, see if you can’t catch it.  NASA’s info can be found here, along with links to a live feed from the pad.  Just remember two things: 1) The feed is typically delayed slightly through a web link, and 2) depending on where you are, the rocket won’t be above the horizon until well after the countdown reaches zero – just be patient!

Update — I did manage to get up in time for a 4 am launch under cloudless skies.  Below you can see the initial appearance of the first stage emerging from behind the trees and the neighbor’s house, and a (very poorly) cropped-together series capturing the entire visibile trajectory.  The gap in the visible line represents coasting of the Antares between main engine cutoff and ignition of the second stage, where from my perspective, it just went dark! 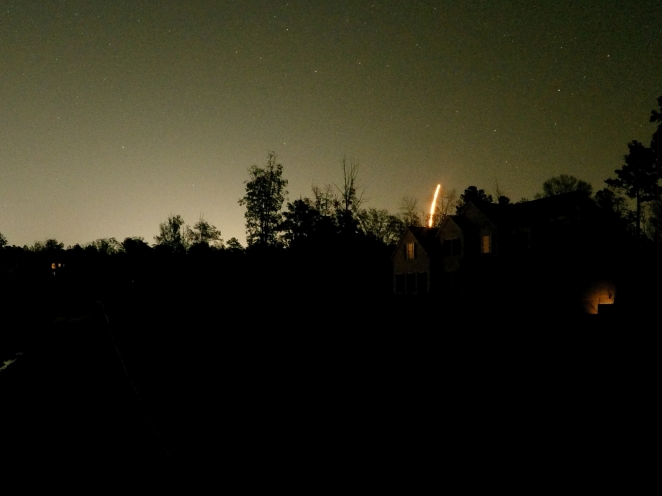 Rough visible trajectory of the launch from ~70 miles away.  The rocket rolls off to the east rather quickly, headed for Low-Earth Orbit.  The gap is the period where the rocket coasted, between main engine cutoff and second-stage ignition.