Your House is Far More Dangerous Than… Plants (Part 1)

Read more
It’s Memorial Day in the US, the semi-official start to outdoors play season for many people, and the time of year where many start to fret about what’s out there lurking in wait.  This is one of those unavoidable and unfortunate topics, in that being safe, aware and confident is key to enjoyment in the wild, but for many the very mention of a venomous spider is enough to cause them to lock the deadbolt and hide under the covers – inside.
So before we get too far, consider this – Your house is trying to kill you.
Seriously – Electricity courses through the walls, and there are dozens of outlets to shock you.  Every wire is a potential ignition source.  Then of course there are stoves and ovens, fire and burn hazards, and deliberately boiling water and sauces.  You probably have a drawer full of sharp knives – maybe they’re even sitting on the counter.  And the chemicals!  The list of poisons under your sink or on the top shelf of your pantry is an astounding catalog of potential illness and death, as is (perhaps) that box of forgotten leftovers in your fridge.  Don’t even get me started about the deadly cutting tools in the garage, or the lawn mowers and automobiles, ladders, more chemicals, etc.
Sounds silly, I know, but the point is that there are a lot of dangers in the typical home.  Dangers that we recognize, acknowledge and live with every day, and lovingly teach our children how to accommodate by the time they’re 5 or so.  So why is it that we willingly accept these hazards, and then freak out when we see a spider, or a snake?  We are afraid to go outside because it’s “dangerous”?  I don’t buy it – it’s not the danger that worries us, it’s lack of understanding.  So don’t use this as an excuse to dismiss all things wild.  Instead, approach it like you would a hot stove – learn about it, respect it, and move on with your life!
Chapter 1 – PLANTS

Let me start by saying there’s no way I can possibly list everything that could hurt you – not because a list has to be incredibly long, but because 1) Dangers are very regional when it comes to wild plants and animals, and 2) People are incredibly creative when it comes to doing dangerous things.  So I’m focusing here on the things you should really know about, and general guidelines on the rest.

We’ll start easy, with the immobile threat of poisonous plants.
First off, there are lots of things that range on the harmful-to-deadly scale of toxicity if you were to be foolish enough to eat an unknown plant.  Just don’t do it.  There are many good, safe, tasty edibles out there – and I, and others like me, will praise their virtues.  But simple rule number one: don’t ingest anything unless you know what it is.  Not all berries are tasty, and not all mushrooms are shiitakes.
Outside of eating something, the most common way people get into trouble with plants is through contact sensitivity to plant secretions, so you should learn to recognize those plants, and keep away from them.  The big three are Poison Ivy, Poison Oak, and Poison Sumac.

Poison Ivy is by far the most common, and it can be a bit of a shapeshifter.  The common rhyme “Leaves of three, leave it be” is a good starting point.  Poison ivy grows in clusters of three leaves, usually pointed ovals of glossy dark green in the summer, burgundy-red in the fall.  On older plants, these leaves may become lobed, adding a little “thumb” to the mitten – but still in groups of three.  The plants produce white berry clusters (which are an important food source for birds, and harmless to them), and will produce impressively thick, hairy vines that climb trees.  Humans react to poison ivy through an immune response to the urushiol produced by the plant, essentially a contact dermatitis, causing an itchy rash.  If you’ve touched any part of the plant, wash with soap and water – the soap is very important to remove the compound – as soon as you’re aware of contact.  It takes time for the skin to absorb and react with the urushiol, but not much.  Reactions can take place anywhere from a few minutes to a few days after contact.  The rash itself is not contagious, but contaminated clothing, the fur of your dog after he’s run through it, etc can still transmit the irritant long after first contact.  It’s the urushiol that’s the problem. 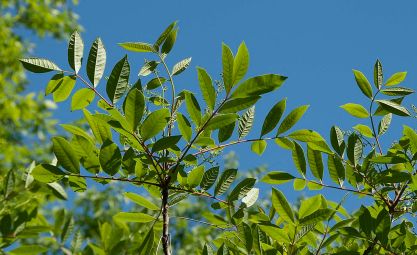 For most people, the rash will clear in a few days, and some are fortunate enough to not have much of a reaction at all.  Mechanism and response to poison oak and poison sumac is very similar.

Whatever you do, don’t burn any of these plants.  The smoke carries the urushiol into your respiratory tract, and there, it can be deadly.
No matter where you go in the US, one of these three is likely around.  But again – know what to look for, and don’t roll around in it, and you’ll do fine.  Poison Ivy is just about everywhere except the deserts.  Poison Oak in predominately in the southeast, and along the west coast (if you’re a Californian, Poison Oak is typically more prevalent than Ivy), and Poison Sumac grows as a small tree, mostly in wet areas of the south, and midwest up through the Great Lakes.
If you KNOW you’re going to be exposed to these plants, use reasonable precautions, like long pants if you’re off trail and in brush.  Otherwise, steer clear if you see it, teach your kids what to look for, and remember to wash up!
Next time, we’ll tackle the creepy crawlies – which ones you actually have to pay attention to, vs. the vast majority that just give you the willies…
Get Out There!
Troy
flying-squirrel.org