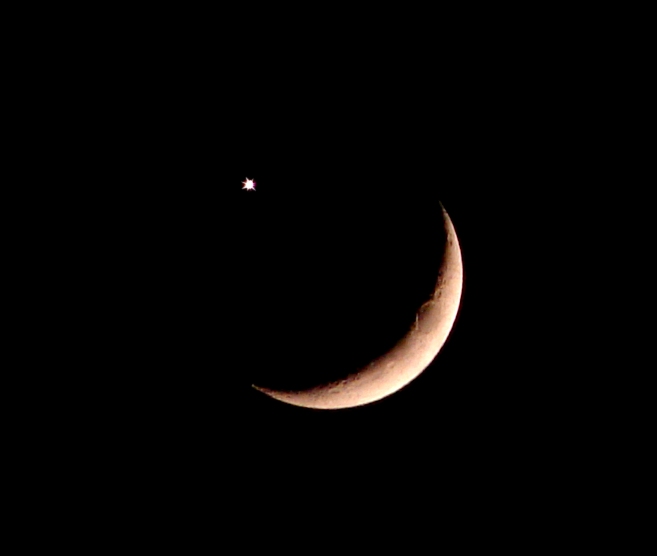 I’ve been meaning to write about this for a while now, but things keep me busy, as they do, and now it’s almost too late, because this event happens TOMORROW AT DAWN!!

Tomorrow, the Moon will slide directly between Earth and the planet Mars, causing an eclipse, of sorts. This type of event is called an “Occultation”, when one body completely blocks out, obscures, and “occults” another. I’ve seen several occultations of stars, notably Aldebaran, but I’ve never seen the Moon occult a planet before… and hey, even if you’re not interested in the event, per se, some early dawn gazing toward the East is worth it – the crescent Moon, Mars, Jupiter, and Saturn are all in a tight line, chased by the rising Sun, and making the orbital plane of the solar system quite visually apparent.

Occultations are interesting for a lot of reasons. By carefully timing these events, particularly when comparing times as viewed from different places on the planet, we refine our understanding of orbital characteristics. (Hooray for geometry, right?) We can also tell things about the atmospheres of the occulting body. For example, when a star or other object is blocked by the Moon, that object is blocked quickly, cleanly, with no color change and with no lensing – all indicating the lack of atmosphere on the Moon. However, given the right angles, we can sometimes see an object flicker as it moves along the horizon, not blocked by just “the Moon”, but by this mountain, then that, then the other…

To me, though, the most visceral impression I get from watching these events comes from the undeniable real-time observation that everything in the sky is moving. You don’t notice the Moon orbiting, other than to see it changes position from night to night. But zoom in on it with a small telescope and watch in reference to something in the background, and you can see it sliding across the sky, not just east-to-west because of Earth’s rotation, but of its own accord, moving west to east against the background.

So tomorrow, just about everybody in North America can watch the Moon occult Mars. Early in the morning, Mars will “set” behind the illuminated limb of a thin waning crescent moon, and appear again from behind the dark western limb of the Moon about an hour and a half later.

Everywhere in between, you have a clear shot at seeing both before sunrise. Check the IOTA (International Occultation Timing Association) site here for specific times and positions of both the Moon and Mars (and the Sun) at disappearance and re-appearance at many reference locations.

I’m hoping for clear skies and will give it a look. This sort of thing doesn’t happen every day! 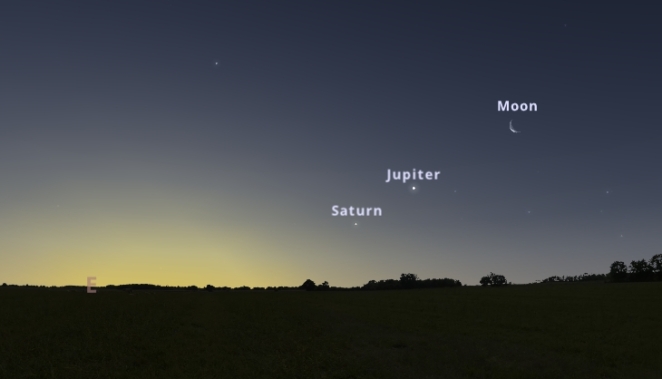 Looking East just before dawn from the Eastern US, Feb 18, 2020.  Mars is unlabelled, about to be occulted by the bright limb of the crescent Moon.  (Screenshot from stellarium-web.org)