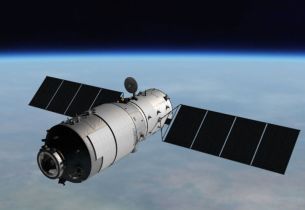 Made you look!  That title echoes a lot of what I’ve seen in more popular media this week, and maybe it worked and got your attention…  but the truth is, you’re PROBABLY not going to die because of a falling space station this week.  As I wrote a couple months ago (happily, because it gave me an excuse to go off on all sorts of tangents about orbital dynamics), the Chinese space station Tiangong-1 is on its way down.  Like, NOW.  Sometime in the next week and a half (before April 6, give or take), Tiangong-1 will snag enough atmosphere to slow dramatically, and then start its final, fiery plunge toward Earth.  Very little, if anything, will actually make it to the surface – but that won’t keep us from anxiously watching and waiting.  Perhaps we can play some sort of global cow-pie bingo?

On a completely different topic, the Spring Star – Arcturus, in the constellation Bootes – is rising these days.  I actually saw it a couple weeks ago while camping near the Chesapeake.  Late at night (11pm, maybe?) I happened to see it low on the eastern horizon (you can do that, gazing over water on a clear night), and I couldn’t tell what it was… at least for a while.  Arcturus is the brightest star in the northern celestial hemisphere (4th brightest star in the sky), so what I saw was akin to a landing light…but redder.

Bootes, and neighbors Canes Venatici and Coma Berenices, from Urania’s Mirror, a set of reference cards printed in 1825.  Arcturus is the bright star in his left (our right) knee.  The arc of the handle in the Big Dipper (Plough) is up and over the dogs’ heads.

See how early (both in the evening, and the season) you can spot it.  Arcturus rising right after sunset is a much better indicator of spring than any Groundhog.  To find it, follow the curve of the handle of the Big Dipper (or Plough, if you’re from across the pond).  If you continue that curve across the sky, you “Arc to Arcturus”.  About an hour after Arcturus rises, bright white Spica (in Virgo) is up too.  So you can continue the path — “Arc to Arcturus, Spike to Spica”.

The name “Arcturus” comes from the Greek word for “Guardian of the Bear”.  Sure enough Arcturus and Bootes, the Herdsman, follow Ursa Major around the pole, together with the two small dogs in Canes Venatici.  Interestingly, Bootes is also known as the Plowman, which fits his position behind “the Plough” – So Bootes and Arcturus work with imagery on both sides of the Atlantic.

Another little tidbit I just stumbled across:  at 19-deg North latitude, Arcturus is the zenith star for Hawaii.  In other words, it passes DIRECTLY overhead if you’re on those islands.  Ancient mariners in Polynesia, who called the star Hokule’a (Hoh Koo LAY ah), the “Star of Joy” could navigate to Hawaii by sailing north (from, say… Tahiti), until Arcturus passed from east to west, directly overhead.  They could then turn west and run straight into Hawaii.  They could make the return trip by using Sirius, which just happens to be the zenith star for Tahiti.

So this Saturday, as you’re enjoying the second Blue Moon of 2018 (see how I snuck that in there?), look for Arcturus nearby, and consider how it’s not only telling you that Springtime is here, but that for years, it enabled some of the most astounding feats of oceanic navigation man has ever accomplished!