Before I get into the planetary stuff, I wanted to issue a reminder – the Orionid meteor shower peaks this weekend, but this shower is not a moment in time.  You should be able to see the Orionids over the next week or so, and you have the added benefit of being able to catch them while the Moon is small and the skies are dark.  You can see them streaking up from the southeast right after dark, but the radiant point in Orion isn’t high until 1-2am.

Check out this photo, taken last Wed by Rebel Guy over at Photogate.ca — He was able to get both a beautiful picture of the Pleiades and an Orionid meteor flying by.  Great catch, Rebel Guy!

In other news, you’ve probably heard through a lot of news outlets that Uranus is a sight to behold this week!  Well…. not really, but it is viewable.  Let me provide two things to consider:

First, the reason that the news has picked this up is that Uranus WAS at opposition on Thursday, Oct 19.  What this means is:  Uranus and Earth are aligned, with the Sun exactly opposite Uranus, from our perspective.  This makes Uranus “full”, and marks the point when the relative distance between Earth and Uranus is likely at a minimum.  However, this is a relative thing – Uranus is still 2.8 BILLION kilometers away.  Or, put another way, it is 18.9 times (let’s just say 19) FARTHER away from us than the Sun is.  Now, granted, if it were at conjunction – meaning the Sun was between us – it would be a heck of a lot farther in absolute terms, but only a little bit farther relatively speaking (21 times the distance to the Sun) AND lost in the Sun’s glare, so this is an improvement.  But “closest” doesn’t really mean “close”.

Second, if you recall, we had a lot of hype about Jupiter being at opposition, and then Saturn.  Again, while the facts of relative geometry and point of closest approach were accurate at those times, it’s not like we missed our chance to see these planets after opposition passed.  I’ve been looking at Saturn all summer.  So it will be with Uranus – don’t panic if you miss it this week, or the next, or even the next.  The cosmos are pretty patient, and while Uranus will be getting farther, and dimmer, every day that goes by, you don’t have to be in a rush to catch it RIGHT NOW, or feel like you missed something if you don’t.  In fact, the change will be so subtle over the next few months that you’ll likely not notice even if you were trying to see Uranus dimming.

All this said though, realize that Uranus is nowhere near as easy a target as Jupiter or Saturn.  Relatively speaking, it’s tiny, and just barely bright enough (Mag ~5.5) to be seen with the naked eye (~Mag 6.0 – your eyes may vary).  It’s fun to find in binoculars, or a telescope, or a long-duration photo.  But it’s only fun really because you know what you’re looking at – its actual visual impact isn’t all that striking.  But it IS another planet, and that’s pretty cool. 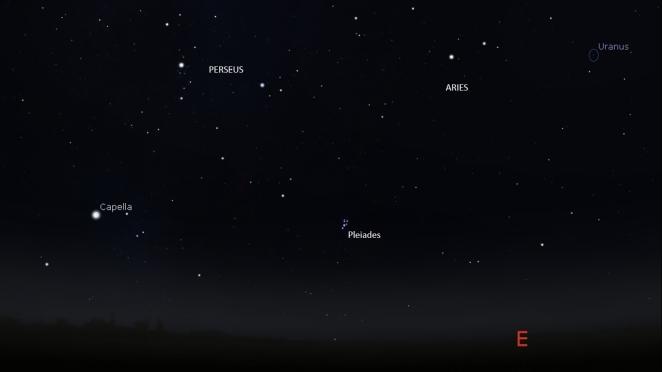 So, try it this week – the Moon won’t interfere – but be advised it won’t be easy.  It’s also in a dark section of the sky, sitting in Pisces, with not a lot of stars to guide you by.  Your best bet is to use a chart like the one here (screenshot from Stellarium), and star-hop from something recognizeable, like Capella, the Pleiades, or Perseus, across the bright stars in Aries, and then try and pick out a blue-green dot.  It really IS that color, and hopefully that will be the giveaway that you’ve spotted a very distant gas giant, but one in our own neighborhood.

Good luck, and Get Out There!
Troy
http://www.flying-squirrel.org