Read more
East of Virginia’s Shenandoah Valley, but west of the main Blue Ridge, there’s a jumble of rugged mountains marked by cliffs, steep-sided gorges, and crystal clear streams.  This area contains the St. Mary’s Wilderness, the largest Wilderness Area in Virginia, and one of my favorite spots for over 30 years.
Like most designated Wilderness Areas, St. Mary’s is nested within a National Forest – George Washington, in this case – but lacks the improvements that are common elsewhere in the Forest system.  Trails are unmarked, streams are unbridged, motors are not allowed (to include power tools, any maintenance is done by hand), and the area is meant to be as natural as possible. Leave No Trace principles definitely apply.

The area encompasses several mountains and valleys, but my favorite spot is in the St. Mary’s River valley, itself.  I’ve been coming here since I was a pre-teen.  The river has carved a very narrow, deep gorge into the rocks here, and along the way tumbles over several cascades, a small waterfall, and numerous deep holes that facilitate swimming in remarkably clear, freezing-cold water.

The trail USED to follow an old narrow gauge railroad bed, built a century ago to haul ore out of a few mines in the area.  The mines can still be found, if you climb  out of the valley a bit.  Because of this, the trail was remarkably even, climbing only a few hundred feet in just over 2 miles between the trailhead and the falls, except for the frequent river crossings which require descending to the water, rock-hopping across, and climbing back up – all areas the railroad used to bridge.  In recent years though, floods from hurricanes have caused the river to undercut cliff banks and destroy the old trail, in many places.  As a result of this, and the general lack of maintenance that prevails in areas like this, the trail is a bit more creative – a few random climbs and additional crossings are now part of the process, and several social trails have sprung up to help find a way through, in an odd combination of well-groomed trail and near-bushwhacking.
Unfortunately, the area has been abused a bit – mostly by groups who ignore the limitations imposed on a designated Wilderness Area, camping where they shouldn’t, destroying vegetation, and unfortunately leaving lots of litter behind.  My recent trip was disappointing in this regard, as an area that I dearly love is not being treated well.  Its popularity is getting the better of it.  There ARE regulations here, but we found several examples where those were being ignored. 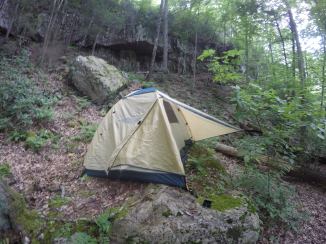 For all that, the place is still beautiful, the stream still clear.  You just have to ignore some people, and unfortunately pick up after others.  We were gratified to at least be able to leave our little campsite (legal, off-trail and at least a half-mile from the falls, where most of the stress is concentrated) a lot cleaner than we found it, by packing out lots of extra stuff – including a pair of socks and a sandal.
Our trip was with a small group, organized as a patrol event with our Boy Scout Troop.  A good backpacking intro – low exertion, good reward, and some good lessons.  A video synopsis of the adventure can be found below.
Get Out There
Troy
flying-squirrel.org