I was really torn last week.  On the one hand, I was out in a tent all week long, camping with a great group of Scouts – and to some extent that’s my happy place.  On the other hand, the weather was SO awesome, clear and crisp, and in the middle of normally humid-sticky summer weather…  the stars were beautiful (as evidenced by this one shot I got over the lake at 11pm), and I had only my phone and GoPro to record it. 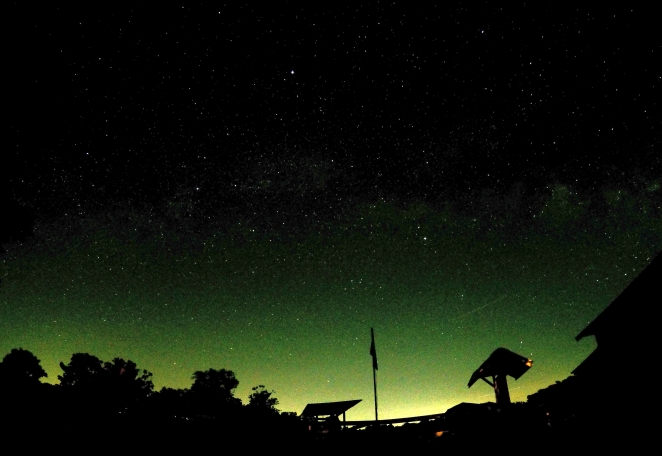 Summer Triangle and the Milky Way.  Altair (in Aquila, the Eagle), is the apex, above and to the right of the flagpole.  Across to the left is Deneb, the tail of cross-shaped Cygnus, the Swan, and above that is Vega and the parallelogram of Lyra, the Lyre.

I still got to OBSERVE it, of course – the Milky Way is now entering our summer evenings, from the tail of Scorpius, through Saggitarius, up across Aquila and Cygnus and through the “Summer Triangle” (Altair, Deneb, Vega).  But spurred on by previous successes, I’m really interested in pointing a DSLR at some of these objects and seeing what I can find.

I’ll start with Scorpius…  After looking at Saturn, in its neighbor Ophiuchus (BTW, the Moon will make a nice pairing with Saturn on the 6th), I’m going to check out the cluster-rich scorpion.  Lying in the galactic plane, as it does, there are lots of open clusters, a few nebulae, and a few globular clusters that are recognizable to the naked eye, but ought to pop with some magnification.  As I mentioned, I’ve been without tools for a week, so this is my PLAN, if the weather cooperates – I’ll share pictures if I can get them, and invite you to focus on this area and let me know what you can find.

Scorpius and some deep sky targets – along with Saturn, as of July 2, 2017, 2300 EDT.  Modified screenshot from Stellarium.

Messier 4 (NGC 6121) – The closest globular cluster to our solar system, M4 is about 75 light-years across, and lies about a full-moon’s width to the west of Antares – the bright red star in Scorpius’s neck.

Messier 80 (NGC 6093) – A more challenging target, this globular lies about halfway between Antares and the upper of three stars in Scorpius’s head (the star’s name is “Acrab”).  It’s a very densely-packed globular.  It will be interesting to see if I can resolve it.

Butterfly Cluster (Messier 6, NGC 6405) – Moving to the Scorpion’s tail, there are a couple of nice open clusters just above his stinger.  The Butterfly is supposedly shaped similarly to a butterfly – two denser regions (wings) flanking a central axis.  Not sure I get that by looking at photos…  will get a closer look!

Ptolemy Cluster (Messier 7, NGC 6475) – Next to the stinger, this cluster appears as a cloud to the naked eye (it’s easily visible, unaided, on a clear night).  Ptolemy thought it was a nebula when he recorded it in 130 AD.  It’s actually a cluster of about 80 individual stars.

NGC 6281 – Moving west of the stinger, this is a fairly bright open cluster of about 55 stars. 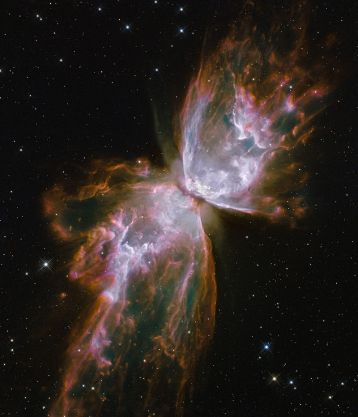 Butterfly Nebula (Bug Nebula, NGC 6302) – A very complex planetary nebula, this is the remnant of a stellar explosion that shed mass along two opposing lobes, resulting in a dust and gas cloud resembling wings on either side of the remaining, extremely hot, white dwarf at its center.  This one may be challenging to resolve, but I’m going to give it a try.

There are a handful of other nice objects farther south in the curve of Scorpius’s tail, like the Northern Jewel Box (NGC 6231), but around here those are fairly close to the horizon and hard for me to spot.  In any case, I’ll give it a try, using a combination of telescope and wide-field long-exposures.  Interested to see what I can find.

Let me know what you can come up with!

Get Out There!
Troy
flying-squirrel.org