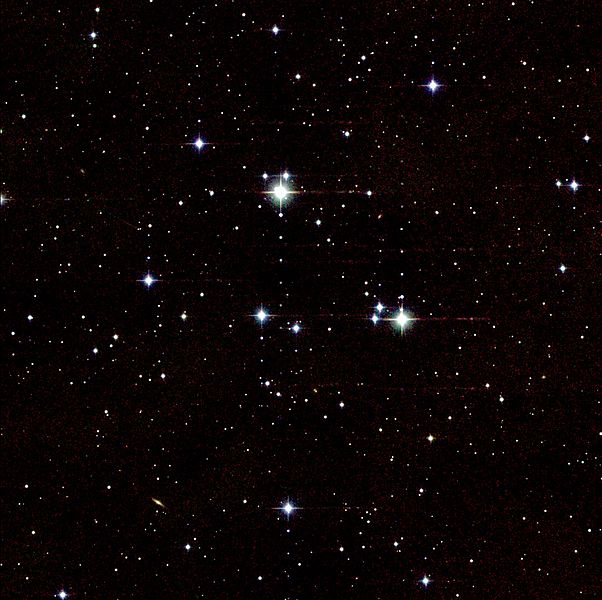 This week I have two things to look at, two thing to know, and one thing to tease you with.

Thing one to look at:  In all my discussions and introduction of the Zodiac constellations, I sort of neglected Cancer.  Cancer is easily overlooked, it’s dim, more recognizable as that dark area between Gemini and Leo than anything else.  But there is a nice open cluster there – the Beehive, or M44.  Located halfway between Gemini’s heads (Castor and Pollux) and the bottom of Leo’s Sickle (Regulus), there’s a dim blur, only easily visible on the very darkest of nights.  I see it easier when I’m not looking straight at it – look at Pollux and you’ll notice a smudge off to the left, then it disappears when you try and focus on it.  Use a pair of binoculars, though, and the Beehive comes alive as a lovely cluster, proving Cancer isn’t so empty after all.

Also, a bonus for those of you who are up early (at bus stops, maybe) on Monday – see that bright object very close to the Moon?  That’s Saturn, which will remain a morning target for a while, but get a telescope on it if you can, the rings are striking.

Thing one to know: the Vernal Equinox is at 6:29am EDT on Monday, March 20.  Even though this marks the point where day and night are equal length, and the days longer from here til June, we still mark it, meteorologically, as the first day of Spring in the Northern Hemisphere, Fall in the Southern.  Really, this is only because the weather lags the Earth-Sun positions by about 6 weeks, and astronomically, this should be the season’s midpoint.  What’s really going on here is that the sun – on the ecliptic, is crossing the Earth’s equator at 6:29, and will be north of it for the next 6 months – therefore higher in the Northern Hemisphere’s daytime sky, for more of the 24-hour day, through Spring and Summer.  Welcome, Spring!

Thing two: Venus is finally leaving us – this is your last week to catch a glimpse in the evening as it gets closer and closer to the sun.  Early Saturday morning (March 25), it will pass between us and the sun, at “inferior conjunction”, and start doing time as the Morning Star.

Finally, a teaser – remember that comet that was so hard to see back in January and early February?  Well, there’s a better target coming – Comet 41P/Tuttle-Giocobini-Kresak will be passing close to Earth over the next couple weeks, and it will be moving between the Big and Little Dippers, visible almost all night long from anywhere in the Northern Hemisphere.  Right now its a little dim, but by the first week of April will be faint to the naked eye (about like the Beehive), and a good binocular target.  It’s also moving toward its closest approach to the sun (perihelion) so chances are its tail will be growing bigger in the next few weeks as well.  The trick will be to spot it when the moon is set, so look for more detail on this next week.