The last time we visited downeast Maine was about 12 years ago.  Now we’ve got a new generation to raise, and exposing them to New England, to lobster, to people who lengthen A’s and drop R’s completely, to granite carved by glaciers, beaches made of rock instead of sand, and plants and animals they’ve never seen, seemed like a great way to spend some time away from home.  Bar Harbor, ME served as our base of operations.

What follows here isn’t a complete travel log – but a highlight of a piece of it, an observation of the waterfront, and appreciation for the families that continue to work the sea.  I’ll hit some of the hiking / outdoorsy stuff separately.

I will digress long enough to say I got to exercise the “Flying” part of my pseudonym on this trip.  Flying light planes is an adventure in and of itself, and there’s a cynical saying among pilots – “Time to spare?  Go by air.”  But most of the time, general aviation just works, and I’m lucky enough to be able to partake.  So yes, we filled up a 4-seat, single piston-engine airplane and covered over 700 miles in about 5.5 hours, with a fuel stop halfway where we just HAPPENED to drop in on some good friends (that we don’t see often enough) and have lunch.  Coming back wasn’t QUITE as easy (rain, headwinds and low ceilings), so our route was longer and more circuitous, but we still made it in just over 7 hours.  For you pilots out there, BHB is convenient to everything, you can rent a car or take the very-well-run bus system (Island Explorer) to Acadia National Park, and beyond.  when we did this 12 years ago we camped at Blackwoods in Acadia and relied on the bus for everything – it actually works. 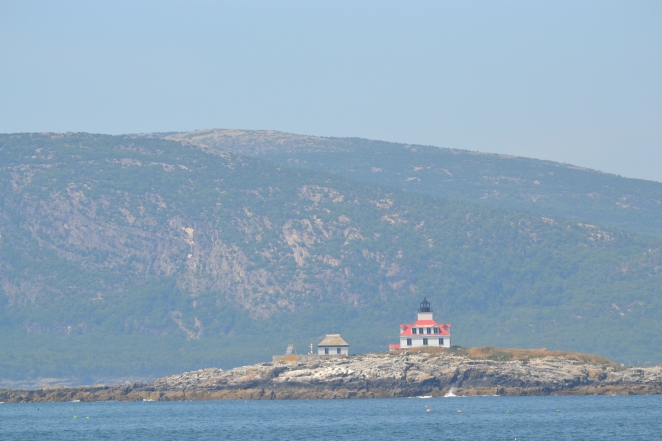 Acadia is a really popular National Park for good reason – it’s beautiful, and accessible.  BUT this time of year it can be crowded.  We were surprised by this, but found that if we got out early (yeah, we didn’t, mornings are not our thing), or waited and hit the park around dinner time, things were reasonable.  With the sun setting after 8pm, we could hit spots in Acadia starting around 4 and have plenty of time to get into the woods and back before dark.  Bar Harbor itself is crowded too – just try and plan mealtimes to avoid the rush, or rely on the many ice cream joints for your nutritional needs, and you’ll get by.

The other crowd-avoiding tactic is to visit the Schoodic Peninsula.  Just east of the main park at Mount Desert Island, Schoodic is an overlooked section of Acadia.  It isn’t empty, but it’s a lot more-so than the main sites around Cadillac Mountain, etc.  PLUS, I’m told that watching the sun set behind Cadillac, as viewed from Schoodic, is a beautiful experience – one that we consistently missed due to persistent evening fog.  Oh well.

But the fog!  That reminds me to stay on topic here…  Everything in the area is really tied to the sea-coast.  Even in interior Acadia – yes, the Carriage Roads make great bike trails, the exposed granite of the mountain cliffs is spectacular – but it’s the dramatic proximity of mountains and sea that really makes the place special.  That sea is cold – mid-50’s F while we were there – and that drives early morning and evening fog that pushes inland even on dry days.  Just 3 miles from the coast and you’re in crystal blue clear skies.  Go to the beach and you may see 100 feet.  The tides are pretty significant too – about 12 feet of vertical change in the Bar Harbor area – and there are many places where acres of rock are accessible only at low tide.

To counter that exposed rock, there are 65 lighthouses on the Maine coast.  And there are about 5,000 miles of coast, thanks to all the islands.  We only saw 5 of these places (we only photographed 4), but as they so often do, each one had character – both a bastion against the sea and an invitation to explore it.

In every harbor, there are lobster boats.  Sure, there are pleasure craft too, lots of sailboats, bowriders, etc – but working boats seem to dominate.  There are an estimated 3 million lobster traps in Maine waters, at depths up to 300 feet.  These are worked daily by about 6,400 licensed fishermen, each with his/her own distinct buoy color scheme.  The average lobsterman or lobsterwoman works 500 traps (maximum is 800 per license), revisiting each trap every 2 to 3 days.  So in rough numbers, that’s 150 traps a day — 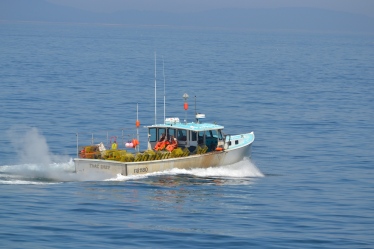 Motor to the buoy.  Hook the line.  Pull the line into a starboard-side winch pulley.  Haul up the trap, Set it on the rail. Remove the bycatch (sea cucumbers, sea stars, urchins, etc) and throw them back into the water.  Remove and inspect the lobsters – those too small AND those too big go back.  Egg-bearing females, or those marked (with a notched tail) as reproducing stock, go back.  Refresh the bait (decaying but not rotten fish).  Throw the old bait overboard to the swarm of seagulls that’s probably following the boat.  Drop the trap back in the water and release the buoy line.

Repeat.  150 times a day.  Then get your catch to market. Then refuel and refit (and repair) your boat, so you can do it all again tomorrow.

It’s really amazing to watch a boat work a line, and how efficiently they can do this.  It’s also amazing how dense the trap placement is – and obvious why a given license has to have identifiable buoy markings to go with it.  We watched several boats navigate through a sea of buoys to hit their own, set about 100 yards from their previous one.  Those different colors are pretty functional.

The other end of the lobster economy is prominent also, of course.  Every corner seems to be occupied by an establishment with a brick oven and four big steamer pots.  The best and most popular seem to be minimalist – not unlike the crab houses along the Chesapeake.  The typical setup includes a small shack with a tank full of live lobsters, sorted by size, where you place your order and choose your dinner, and then a collection of outdoor picnic tables under some sort of cover – maybe you’re lucky enough to be able to pick between a shed roof, and awning, or an umbrella – and plenty of happy people get to eat lobsters al fresco.  We enjoyed ours – and again, also got to introduce our boys to the art.  Having grown up with crabs, they took to it pretty quickly.

We also visited a lobster hatchery – the only one of its kind, we understand.  Though it’s been around a while, the operation is still on a shoestring, largely volunteer-run, and obviously still experimental, to a degree.  They have impressive statistics on the significantly reduced mortality rates among farm-raised lobsters to the point that they’re about an inch long.  At that point though, the baby lobsters have to be returned to the ocean, and it’s incredibly difficult if not impossible to get hard numbers on how many of these farm-raised lobsters survive to harvest size.  It stands to reason if you’re able to put more in the water at a certain age, it’s a good thing for the lobster population – but then again there are so many lobster predators, you might just be rolling out a buffet dinner for the local fish and crabs in that brief interval between a baby lobster getting in the water and finding a safe haven in which to grow up.  Intriguing idea, nonetheless.

What’s the point of all this?  Well, for us it was the cultural item that made Maine different – I mean, ignoring the geology and the road-killed porcupines.  Lobsters and Maine are intertwined, and for many, many people, working the water is a way of life – and though we have our own crustacean-based waterman economy at home, it’s different enough that it defines a region, and gives us the opportunity to learn.  And that’s gratifying to me.  In a society where every town has a Wal-Mart, and we’re so very culturally homogenous, it’s great to see that even over such a short distance, the land, the sea, the plants and animals are different enough to drive us to adopt different lifestyles and priorities, and to live in completely different ways.  Exploring these things is really what travelling is about. 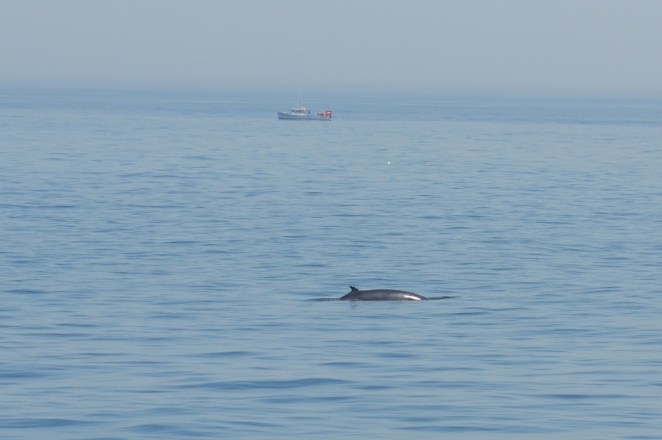 A Minke whale surfacing near the ever-present lobster boat in the Gulf of Maine.

3 thoughts on “Lighthouses and Lobsters”